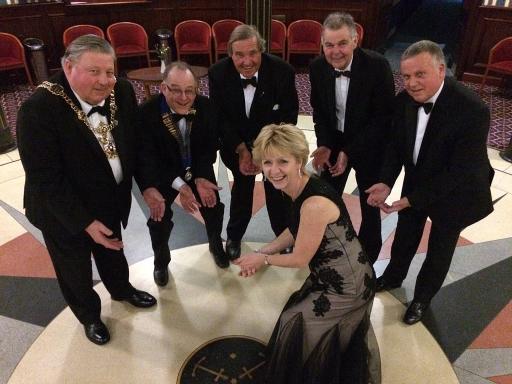 A Hampshire centre for adults with learning difficulties will receive a financial boost thanks to the support of property professionals in and around Portsmouth.

Around £5,000 was set to be raised by Portsmouth Property Association (PPA), which has a record 150 members, including estate, lettings and property management agents, commercial property agents, chartered surveyors, developers, accountants, solicitors and bankers.

The fundraising highlight was the annual charity dinner held by the PPA at the city’s The Royal Maritime Club, with 230 guests attending.

Monies from a grand auction and raffle will go to New Blendworth Centre in Horndean – the charity is the one chosen by PPA Steve Cripps and provides work placements in horticulture.

Afterwards, Steve said: “We were overwhelmed by the generosity and backing of PPA members – our annual charity dinner continues to be one of the highlights of the business community’s calendar.”

He added: “It would also be important to say that all of us have a part to play in the regeneration of the city.”

Steve, who works for NatWest in Fareham as the SME relationship manager, is the first high street banker to hold the position of PPA chairman since the organisation was formed 96 years ago. He is to be chairman for a second consecutive year.

The event was sponsored by Portsmouth legal firm Verisona Law and The News in Portsmouth, with the city’s Lord Mayor, Councillor Frank Jonas, a top-table guest. PPA made a £250 donation to his charity fund.

Guest speaker Geoff Miller OBE, who played 34 test matches and 25 one-day internationals for England before becoming National Selector for the England team from 2008 to 2013, brought the house down with humorous stories about his professional career.

In one anecdote, he recalled how his own father, fearing for Geoff’s safety, admitted shutting his eyes in terror as he watched his son at home on TV face a near-100mph ball in the then-youngster’s Test batting debut for England against the West Indies in August 1976.

“It must be hereditary,” joked Geoff, to gales of laughter.

The grand auction, carried out by auctioneer and keen PPA supporter Clive Emson, the founder and chairman of regional land and property auctioneers Clive Emson, raised £2,140.

One of the nine lots, donated by the PPA, for a petrol-head ride in a super-car, attracted the highest bid of the night at £340.

Other lots, from signed soccer memorabilia to a tour and Champagne lunch at the Royal Albert Hall in London, were donated by the PPA, Ralph Evans of Hayling Island, Tigertiger, Property Search Group, Rob Paul Studios and The News.

Connect with us on Social Media

Economic Update by Bank of England

Economic Update by the Bank of England – Online webinar for members.

Regeneration Projects in the city of Portsmouth